It is well-known that contact between speakers of different languages or varieties leads to dynamics in many respects. From a grammatical perspective, especially contact between closely related languages/varieties fosters contact-induced innovations. The evaluation of such innovations reveals speakers’ attitudes and is in turn an important aspect of the sociolinguistic dynamics linked to language contact. In this volume, we assemble studies on such settings where typologically congruent languages are in contact, i.e. language contact within the Germanic branch of the Indo-European language family. Languages involved include Afrikaans, Danish, English, Frisian, (Low and High) German, and Yiddish. The main focus is on constellations where a variety of German is involved (which is why we use the term ‘German(ic)’ in this book).

So far, studies on language contact with Germanic varieties have often been separated according to the different migration scenarios at hand, which resulted in somewhat different research traditions. For example, the so-called Sprachinselforschung (research on ‘language islands’) has mainly been concerned with settings caused by emigration from the continuous German-speaking area in Central Europe to locations in Central and Eastern Europe and overseas, thus resulting in some variety of German abroad. However, from a linguistic point of view it does not seem to be necessary to distinguish categorically between contact scenarios within and outside of Central Europe if one thoroughly considers the impact of sociolinguistic circumstances, including the ecology of the languages involved (such as, for instance, German being the majority language and the monolingual habitus prevailing in Germany, but completely different constellations elsewhere). Therefore, we focus on language contact as such in this book, not on specific migration scenarios. Accordingly, this volume includes chapters on language contact within and outside of (Central) Europe. In addition, the settings studied differ as regards the composition and the vitality of the languages involved. The individual chapters view language contact from a grammar-theoretical perspective, focus on lesser studied contact settings (e.g. German in Namibia), make use of new corpus linguistic resources, analyse data quantitatively, study language contact phenomena in computer-mediated communication, and/or focus on the interplay of language use and language attitudes or ideologies. These different approaches and the diversity of the scenarios allow us to study many different aspects of the dynamics induced by language contact. With this volume, we hope to exploit this potential in order to shed some new light on the interplay of language contact, variation and change, and the concomitant sociolinguistic dynamics. Particularly, we hope to contribute to a better understanding of closely related varieties in contact.

Christian Zimmer (Freie Universität Berlin) currently works in his research project on the language use of German-speaking minorities in Namibia and South Africa (“The dynamics of German in the multilingual context of Southern Africa”; funded by the German research council, DFG). He received his PhD in 2016 at Freie Universität Berlin for a dissertation on morphological variation in (Standard) German. His main research interests centre around grammatical variation and change, language contact, corpus linguistics, and quantitative sociolinguistics. 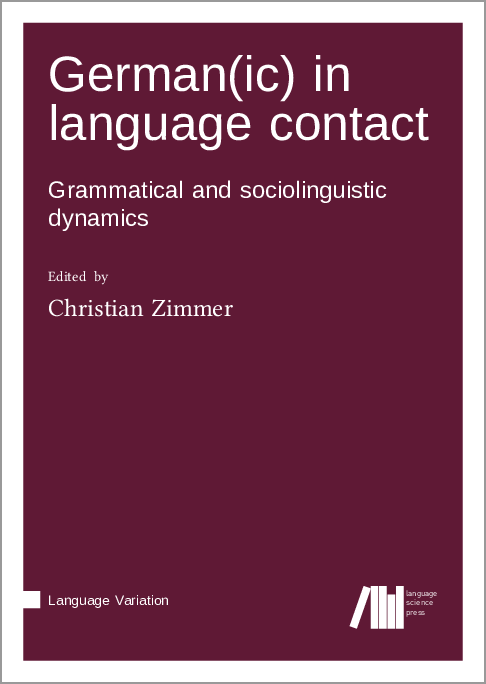