The papers in this volume were presented at the 50th Annual Conference on African Linguistics held at the University of British Columbia in 2019. The contributions span a range of theoretical topics as well as topics in descriptive and applied linguistics. The papers reflect the typological and genetic diversity of languages in Africa and also represent the breadth of the ACAL community, with papers from both students and more senior scholars, based in North America and beyond. They thus provide a snapshot on current research in African linguistics, from multiple perspectives. To mark the 50th anniversary of the conference, the volume editors reminisce, in the introductory chapter, about their memorable ACALs.

Lee Bickmore is Professor of Anthropology and Director of the Program in Linguistics & Cognitive Science at the University at Albany (SUNY). He is a phonologist whose research focuses on linguistic prosody—especially tone. His areal interests include the Bantu languages of Zambia, Tanzania, Kenya, Uganda and Malawi. His monograph, Cilungu Phonology , is a comprehensive study of the phonological and morphological patterns found in this under-studied Zambian Bantu language.

Michael Cahill is Orthography Services Coordinator for SIL International. Trained as a
phonologist, with a dissertation on Konni phonology, and an interest in other Gur family
languages, he has expanded his interests recently into all the factors that affect orthographies
for newly-written languages. This includes phonology, but much more, as documented in
Developing Orthographies for Unwritten Languages, which he co-edited. He still has a keen
interest in tone issues, and continues his global information gathering on labial-velar obstruents.

Michael Diercks is Associate Professor of Linguistics and Cognitive Science at Pomona College. His research focuses on the morphosyntax of East African languages. He is part of an ongoing project documenting four Luyia languages spoken in Western Kenya, and works on syntactic theory having to do with licensing of noun phrases, agreement, and the intersection of information structure and syntax.

Laura J. Downing is the Professor of African Languages at the University of Gothenburg, Sweden. Her research focuses on the phonology of African languages, in particular issues (theoretical and typological) related to tone and intonation, laryngeal contrasts and alternations, prosodic morphology, the phonology-syntax interface and the expression of focus. She has conducted fieldwork and data collection on a number of languages, most recently Chichewa, Somali, Tumbuka and Zulu.

James Essegbey is Professor of African Languages and Linguistics at the University of Florida, Gainesville. His research interests include the description and documentation of endangered languages, particularly the Ghana-Togo Mountain (GTM-Kwa) languages, that are spoken in Ghana, Togo and Benin. He focuses on Nyangbo and Animere, both spoken in Ghana. Essegbey also investigates the syntax and semantics of verbs in the Gbe languages of West Africa which are said to lack meaning without a complement.

Katie Franich is an Assistant Professor of Linguistics and Cognitive Science at The University of Delaware. Her research focuses on phonetics and phonology, drawing on experimental methods in speech acoustics, articulation, and perception to inform our understanding of language structure. Much of her work draws on data from Medʉmba, a Grassfields Bantu language spoken in Cameroon, on which she has been conducting fieldwork since 2010. She is currently focused on issues of timing in speech, and how various aspects of communicative timing (e.g. co-speech gesture and conversational turn-taking) vary across languages and cultures.

Laura McPherson is Associate Professor of Linguistics at Dartmouth College. Her research is driven by primary fieldwork and in-depth description of tonal languages, primarily in West Africa. She has written two reference grammars of African languages, A Grammar of Tommo So (2013) and A Grammar of Seenku (2020). From a theoretical perspective, her work focuses on diverse aspects of tone, including its phonetics, its phonological representation, its interfaces with morphology and syntax. She is currently conducting a cross-linguistic study of musical surrogate languages to document these endangered traditions and analyze their phonetic and phonological underpinnings.

Sharon Rose is Professor in the Linguistics Department at the University of California San Diego. Her research addresses the phonology of African languages, with a focus on Semitic languages of Ethiopia and Eritrea and Kordofanian languages of Sudan. Within Semitic, she has investigated long distance palatalization in the Gurage languages and Harari, the phonetics and phonology of ejectives, and consonant harmony. Her work on Moro, a Heiban language, has examined voicing dissimilation, tone and its relationship with affix order, and intonation. She is currently working on two other Heiban languages of Sudan, Tira and Rere. 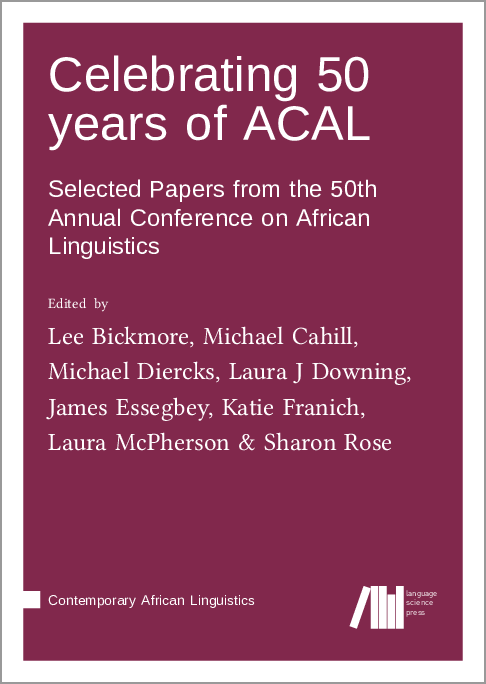