On this and other worlds: Voices from Amazonia

This edited volume offers a collection of twelve interlinear texts reflecting the vast linguistic diversity of Amazonia as well as the rich verbal arts and oral literature traditions of Amazonian peoples. Contributions to the volume come from a variety of geographic regions and represent the Carib, Jê, Tupi, East Tukano, Nadahup, and Pano language families, as well as three linguistic isolates. The selected texts exemplify a variety of narrative styles recounting the origins of constellations, crops, and sacred cemeteries, and of travel to worlds beyond death. We hear tales of tricksters and of encounters between humans and other beings, learn of battles between enemies, and gain insight into history and the indigenous perspective of creation, cordiality and confrontation.

The contributions to this volume are the result of research efforts conducted since 2000, and as such, exemplify rapidly expanding investment and interest in documenting native Amazonian voices. They moreover demonstrate the collaborative efforts of linguists, anthropologists, and indigenous leaders, storytellers, and researchers to study and preserve Amazonian languages and cultures. Each chapter offers complete interlinear analysis as well as ample commentary on both linguistic and cultural aspects, appealing to a wide audience, including linguists, historians, anthropologists, and other social scientists. This collection is the first of its type, constituting a significant contribution to focused study of Amazonian linguistic diversity and a relevant addition to our broader knowledge of Amerindian languages and cosmologies.

Kristine Stenzel lives and works in Brazil, where she is a Professor in the Department of Linguistics at the Federal University of Rio de Janeiro (UFRJ). She received her PhD in Linguistics in 2004 from the University of Colorado Boulder and did post-doctoral work with Bruna Franchetto from 2005-2007 at the Museu Nacional /UFRJ. Since 2000, her research has focused on the description, documentation, and analysis of Kotiria (Wanano) and Wa’ikhana (Piratapuyo), languages of the East Tukano family spoken in northwestern Amazonia. Her publications on these languages include A Descriptive Grammar of Kotiria (Wanano) (2013, University of Nebraska Press) and numerous articles and book chapters ranging from issues in phonology to aspects of morphosyntax and discourse-level phenomena. She has organized extensive documentary archives on both languages, deposited at the Endangered Languages Archive (ELAR/SOAS/University of London) and the Documentation of Indigenous Languages and Cultures Archive (FUNAI/Museu do Índio/Rio de Janeiro). Her broader interests include questions related to language contact, multilingualism, and language ideology, and in 2013, she coedited the volume Cultural and linguistic interaction in the Upper Rio Negro Region (Amazonia) with Patience Epps. Current projects include new documentation and analysis of conversational data involving Kotiria and Wa’ikhana speakers, in order to investigate grammatical structures and patterns of multilingual discourse from an interactional perspective, and to contribute to the development of a typology of regional multilingual systems in Amazonia and beyond.

Bruna Franchetto is a Full Professor in both the Department of Linguistics and the Department of Anthropology (National Museum) at the Federal University of Rio de Janeiro (UFRJ), from which she received her PhD in Social Anthropology in 1986. Since 1977, her linguistic and ethnological research has focused on the description, documentation, and analysis of Kuikuro, one of the varieties of the Upper Xingu Carib Language, spoken in southern Amazonia, and on oral traditions and verbal arts. She has organized an extensive documentary archive on Kuikuro housed at the DoBeS Program (Max Planck Institute for Psycholinguistics) and the Documentation of Indigenous Languages and Cultures Archive (FUNAI/Museu do Índio/Rio de Janeiro). At the Museu do Índio, she has coordinated the ProDoclin (Program for the Documentation of Indigenous Languages) since 2009 and the Project for Pedagogical Grammars since 2013. Her publications on Kuikuro and the other varieties of the Upper Xingu Carib Language include articles and book chapters on phonology, morphology, syntax and verbal arts. Her broader interests include questions related to translation (from and to indigenous languages), ethnopoetics, genesis and impact of writing and literacy in native languages, multilingualism and linguistic ideology, the relation between language and music in songs and chanted speech, verbal arts and gender. Current projects include the final stages of development of a broad descriptive grammar and an encyclopedic dictionary of Kuikuro, two books with Kuikuro historical narratives, and a compilation of more than a hundred Kuikuro feminine songs. In 2014, she began a new collaborative project on revitalization of Guató (isolate), Yawanawa (Pano), Umutina and Pataxó (Macro Jê). 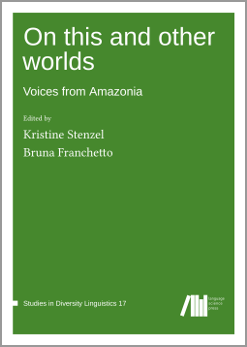