Diathesis ("valency alternation") is a sentence structure that reshapes the roles of a verb. The prototypical example of such a diathesis is the well-known passive. However, there are very many other such role-remappings, like antipassives, applicatives, causatives, etc.

This book presents an encyclopaedic survey of diathesis in German. The objective is to catalogue all diatheses that exist in this language. Currently almost 250 different German diatheses are described in this book, some highly productive, some only attested for a handful of verbs. The main goal of this book is to present this wealth of grammatical possibility in a unified manner, while at the same time attempting to classify and organise this diversity. A summary of the about 80 most prominent diatheses is also provided, including many newly-minted German names, because most these diatheses did not have a German name yet.

It might come as a surprise that there are so many different diatheses in German, but my impression is that in this respect German is no exception among the world's languages. I expect that all languages have a similar abundance of different ways in which to construe a sentence around a lexical predicate. In a sense, a diathesis allows for the expression of a distinct perspective on the event described, something that is arguably a common desire of any language user.

Except for diathesis this book also aims to completely catalogue its counterpart: epithesis. An epithesis is a derived sentence structure in which the marking of the verb roles remains constant. Basically, these are the grammaticalised constructions expressing tense-aspect-mood-evidentiality in German. The list of major epitheses is also quite long (about 40 constructions), but it is quite a bit smaller than the list of major diatheses (about 80 constructions). This indicates that from a purely grammatical perspective, diathesis ("grammatical voice") is about a two-times more elaborate topic than epithesis ("tense-aspect-mood marking") in German.

Michael Cysouw is professor for language typology and quantitative linguistics at the Philipps University Marburg. He is the author of The paradigmatic structure of person marking and co-author of the Unicode cookbook for linguists. His main research interests are broad-scale investigations of the world's linguistic diversity, with a particular fondness for unusual structures from a worldwide perspective. This book represents a new avenue of his research, investigating a seemingly familiar language from a typologically-inspired perspective. 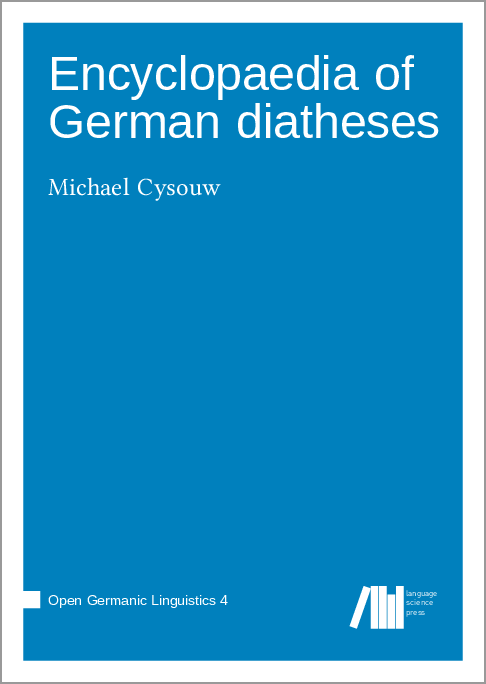