It is well-known that derivational affixes can be highly polysemous, producing a range of different, often related, meanings. For example, English deverbal nouns with the suffix -er can denote instruments (opener), agents (writer), locations (diner), or patients (loaner). It is commonly assumed that this polysemy arises through a compositional process in which the affix interacts with the semantics of the base. Yet, despite intensive research in recent years, a workable model for this interaction is still under debate.

In order to study and model the semantic contributions of the base and of the affix, a framework is needed in which meanings can be composed and decomposed.
In this book, I formalize the semantic input and output of derivation by means of frames, that is, recursive attribute-value structures that serve to model mental representations of concepts. In my approach, the input frame offers an array of semantic elements from which an affix may select to construct the derivative's meaning.
The relationship between base and derivative is made explicit by integrating their respective frame-semantic representations into lexical rules and inheritance hierarchies.

I apply this approach to a qualitative corpus study of the productive relationship between the English nominalizing suffix -ment and a semantically delimited set of verbal bases. My data set consists of 40 neologisms with base verbs from two semantic classes, namely change-of-state verbs and verbs of psychological state. I analyze 369 attestations which were elicited from various corpora with a purposeful sampling approach, and which were hand-coded using common semantic categories such as event, state, patient and stimulus.

My results show that -ment can target a systematically restricted set of elements in the frame of a given base verb. It thereby produces a range of possible readings in each derivative, which becomes ultimately interpretable only within a specific context. The derivational process is governed by an interaction of the semantic elements provided by the base on the one hand, with properties of the affix (e.g. -ment's aversion to [+animate] readings) on the other. For instance, a shift from the verb annoy to a result-state reading in annoyment is possible because the input frame of verbs of psychological state offers a RESULT-STATE attribute, which, as is fixed in the inheritance hierarchy, is compatible with -ment. Meanwhile, a shift from annoy to an experiencer reading in annoyment fails because the value range of the attribute EXPERIENER is fixed to [+animate] entities, so that -ment's animacy constraint blocks the inheritance mechanism.

Furthermore, a quantitative exploration of my data set reveals a likely blocking effect for some -ment readings. Thus, while I have found most expected combinations of nominalization and reading attested, there are pronounced gaps for readings like instrument or stimulus. Such readings are likely to be produced by standardly subject-denoting suffixes such as -er or -ant, which may reduce the probability for -ment derivation. The quantitative analysis furthermore shows that, within the subset of attested combinations, ambiguity is widespread, with 43% of all combinations of nominalization and reading being only attested ambiguously.

This book shows how a derivational process acts on the semantics of a given verbal base by reporting on an in-depth qualitative study of the semantic contributions of both the base and the affix. Furthermore, it demonstrates that an explicit semantic decomposition of the base is essential for the analysis of the resulting derivative's semantics.

Lea Kawaletz earned her B.A. and M.A. in Anglistics from Heinrich-Heine-University Düsseldorf, with a focus on English linguistics and Medieval Studies. She then joined the DFG Collaborative Research Center 911 "The Structure of Representations in Language, Cognition, and Science" as a research assistant. In project C08 "The semantics of derivational morphology: A frame-based approach", she completed her PhD on the polysemy of English -ment nominalizations. Generally, she is interested in applying both formal and computational approaches to linguistic problems, especially in the areas of morphology, semantics, and pragmatics. Most recently, she has worked on several projects dealing with the linguistic features of argumentative discourse. 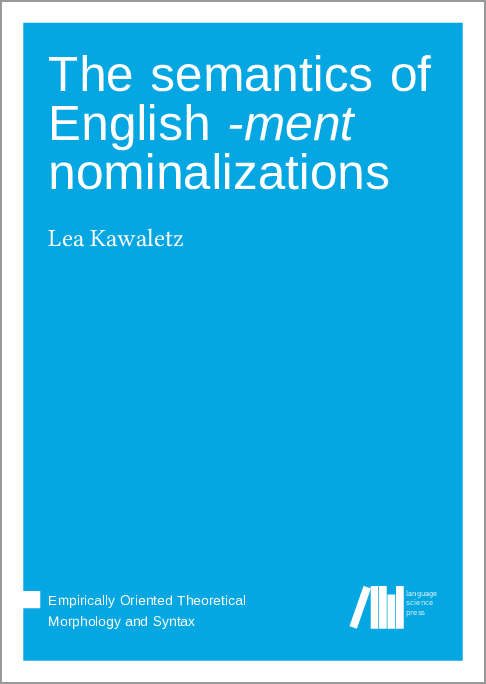