This book is superseded by the third edition, available at http://langsci-press.org/catalog/book/255.

The second part of the book compares these approaches with respect to their predictions regarding language acquisition and psycholinguistic plausibility. The nativism hypothesis, which assumes that humans posses genetically determined innate language-specific knowledge, is critically examined and alternative models of language acquisition are discussed. The second part then addresses controversial issues of current theory building such as the question of flat or binary branching structures being more appropriate, the question whether constructions should be treated on the phrasal or the lexical level, and the question whether abstract, non-visible entities should play a role in syntactic analyses. It is shown that the analyses suggested in the respective frameworks are often translatable into each other. The book closes with a chapter showing how properties common to all languages or to certain classes of languages can be captured.

The book is a translation of the German book Grammatiktheorie, which was published by Stauffenburg in 2010. The following quotes are taken from reviews:

With this critical yet fair reflection on various grammatical theories, Müller fills what was a major gap in the literature. Karen Lehmann, Zeitschrift für Rezen­sio­nen zur ger­man­is­tis­chen Sprach­wis­senschaft, 2012

This is the kind of work that has been sought after for a while [...] The impartial and objective discussion offered by the author is particularly refreshing. Werner Abraham, Germanistik, 2012

This book is a new edition of http://langsci-press.org/catalog/book/25. 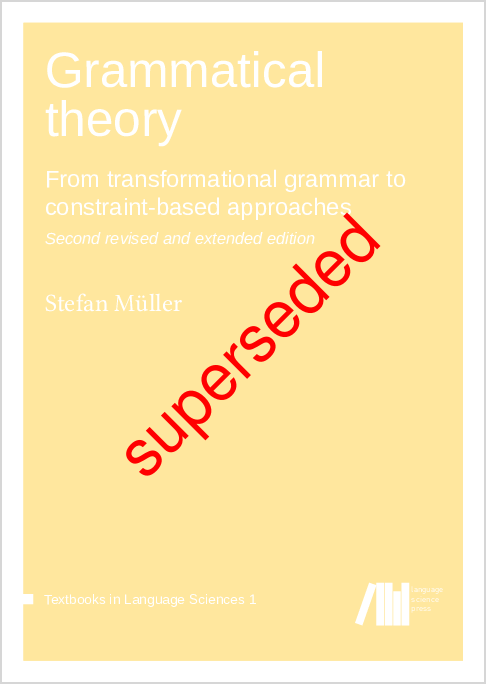