This book deals with the effects of three different learning contexts mainly on adult, but also on adolescent, learners’ language acquisition. The three contexts brought together in the monograph include i) a conventional instructed second language acquisition (ISLA) environment, in which learners receive formal instruction in English as a Foreign Language (EFL); ii) a Study Abroad (SA) context, which learners experience during mobility programmes, when the target language is no longer a foreign but a second language learnt in a naturalistic context; iii) the immersion classroom, also known as an integrated content and language (ICL) setting, in which learners are taught content subjects through the medium of the target language—more often than not English, used as the Lingua Franca (ELF).

The volume examines how these contexts change language learners’ linguistic performance, and also non-linguistic, that is, it throws light on how motivation, sense of identity, interculturality, international ethos, and affective factors develop. To our knowledge, no publication exists which places the three contexts on focus in this monograph along a continuum, as suggested in Pérez-Vidal (2011, 2014), with SA as ‘the most naturalistic’ context on one extreme, ISLA on the other, and ICL somewhere in between, while framing them all as international classrooms. Concerning target languages, the nine chapters included in the volume analyze English, and one chapter deals with Spanish, as the target language. As for target countries in SA programmes, data include England, Ireland, France, Germany, and Spain in Europe, but also Canada, China, and Australia. While the main bulk of the chapters deal with tertiary level language learners, a language learning population which has received less attention by research thus far, one chapter deals with adolescent learners.

Carmen Pérez-Vidal, Sonia López, Jennifer Ament and Dakota Thomas-Wilhelm all served on the organizing committee for the EUROSLA workshop held at the Universitat Pompeu Fabra, Barcelona, in May 2016. It is from this workshop that this monograph was inspired

Carmen Pérez Vidal is currently an accredited professor of English at the Department of Translation and Linguistic Sciences at the Universitat Pompeu Fabra. Her research interests lie within the field of foreign language learning, bilingualism, and the effects of different learning contexts on language acquisition, namely study abroad, immersion and instructed second language acquisition. On this topic, she has conducted extensive research, as the leading researcher of the Study Abroad and Language Acquisition (SALA) project, and published internationally. She has edited the volume Language Acquisition in Study Abroad and Formal Instruction Contexts (Pérez Vidal, 2014), published by John Benjamins, and, more recently, contributed on the above topic to the Routledge Handbook of Instructed Second Language Acquisition, and to the Routledge Handbook on Study Abroad. In 2009, she was the launching co-coordinator of the AILA Research Network (ReN) on Study abroad.

Sonia López-Serrano is an English lecturer at the Department of Translation and Linguistic Sciences at Universitat Pompeu Fabra. She holds a Master’s degree in Second Language Acquisition (SLA) from the Universidad de Murcia, Spain, and is currently in the last year of the Doctoral programme at the same university. Her research interests focus on ISLA and L2 writing. In particular, she has conducted research on the language learning potential of individual writing tasks and the effects of different learning contexts on foreign language writing.

Jennifer Ament is currently a full-time researcher at Universitat Internacional de Catalunya (UIC) in Barcelona. She holds a Master’s degree specializing in Second Language Acquisition (SLA) from Universitat Pompeu Fabra (UPF) and is following the Doctoral programme in Linguistics at the same university. She is an experienced English language teacher and has worked at all levels of education in the North American, European, and Asian settings. Her main research interests are in the field of SLA, bilingual education, pragmatics, and language policy. She is currently analysing the effects of English-medium instruction (EMI) on the acquisition of pragmatic markers focusing on individual learner differences. She works as head of production for The Linguistics Journal and reviewer for the International Journal for Higher Education.

Dakota Thomas-Wilhelm is currently a full-time English as a Second Language instructor in English as a Second Language Programs at the University of Iowa. He holds a Master’s degree specializing in Language Acquisition and Language Learning from Universitat Pompeu Fabra and is following the Doctoral program in English Studies with a focus in Second Language Acquisition at Universitat Autònoma de Barcelona. His research interests lie within the field of SLA, English grammar instruction, and the design and implementation of linguistically-informed ESL materials and curriculum. In particular, his current focus concerns the designing of linguistically-informed materials to teach difficult grammar concepts using syntax and semantics. 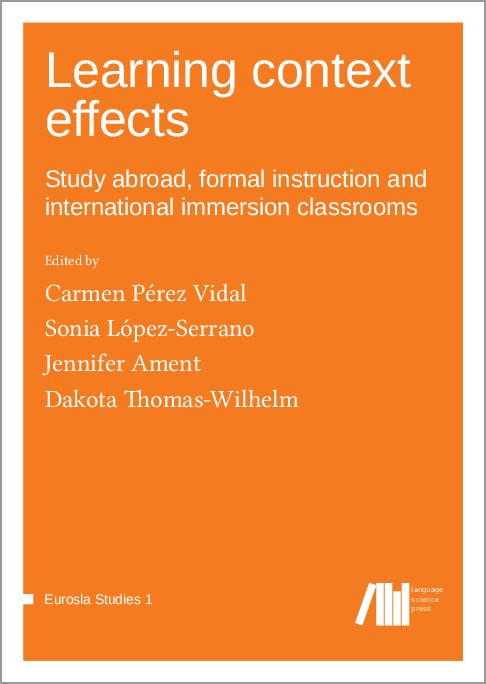