On looking into words (and beyond): Structures, Relations, Analyses

On Looking into Words is a wide-ranging volume spanning current research into word structure and morphology, with a focus on historical linguistics and linguistic theory. The papers are offered as a tribute to Stephen R. Anderson, the Dorothy R. Diebold Professor of Linguistics at Yale, who is retiring at the end of the 2016-2017 academic year. The contributors are friends, colleagues, and former students of Professor Anderson, all important contributors to linguistics in their own right. As is typical for such volumes, the contributions span a variety of topics relating to the interests of the honorand. In this case, the central contributions that Anderson has made to so many areas of linguistics and cognitive science, drawing on synchronic and diachronic phenomena in diverse linguistic systems, are represented through the papers in the volume.

The 26 papers that constitute this volume are unified by their discussion of the interplay between synchrony and diachrony, theory and empirical results, and the role of diachronic evidence in understanding the nature of language. Central concerns of the volume include morphological gaps, learnability, increases and declines in productivity, and the interaction of different components of the grammar. The papers deal with a range of linked synchronic and diachronic topics in phonology, morphology, and syntax (in particular, cliticization), and their implications for linguistic theory.

Claire Bowern was promoted to Professor of Linguistics in 2017. Following graduation from Harvard University, she spent four years in Rice University’s Department of Linguistics before coming to Yale. Her research focuses on the languages and history of Indigenous Australia. She has been working with speakers of endangered, Indigenous languages since 1998, both through fieldwork with the last speakers of several languages from Northern Australia and through archival work with historical records, ranging from the 1770s to the mid 1960s. Her work combines traditional methods of language documentation and historical reconstruction with computational phylogenetics and statistical approaches to language history. She is the author of two reference grammars, two text books, and has edited or coedited several books on language change, including the 2014 Routledge Handbook of Historical Linguistics (with Bethwyn Evans). She is associate editor at Diachronica, past chair of the Linguistic Society of America’s Ethics Committee, and a current LSA media liaison. Her work is funded by the National Science Foundation.

Laurence Horn, Professor Emeritus of Linguistics and Philosophy at Yale University, received his PhD at UCLA under the supervision of Barbara Partee. His 1972 dissertation, *On the Semantic Properties of Logical Operators in English,* introduced the notion of scalar implicature. He has taught at U.C. Berkeley, the University of Southern California, Aix-Marseille, and Wisconsin, and at linguistic institutes at Stanford, U.C. Santa Cruz, Illinois, Michigan State, and Ljubljana. He has been a plenary speaker at conferences in Belgium, China, Croatia, France, Germany, Great Britain, Israel, Japan, Korea, the Netherlands, Norway, Poland, Switzerland, Sweden, and the U.S. He is the author of *A Natural History of Negation* (Chicago, 1989/CSLI, 2001) and numerous papers and encyclopedia and handbook entries on negation, implicature, lexical semantics, logic, and pragmatic theory and is the editor of *Negation and Polarity* (with Yasuhiko Kato; Oxford, 2000), The Handbook of Pragmatics (with Gregory Ward; Blackwell, 2004),* Explorations in Pragmatics* (with Istvan Kecskes; de Gruyter, 2007), *The Expression of Negation* (de Gruyter, 2010), and *Micro-Syntactic Variation in North American English* (with Raffaella Zanuttini; Oxford, 2014). He is an active member of the American Dialect Society and the Linguistic Society of America and an elected Fellow of the LSA.

Raffaella Zanuttini received her PhD at the University of Pennsylvania in 1991 and is currently Professor of Linguistics at Yale. Her research focuses on comparative syntax. She has worked extensively on the range and limits of variation in the syntactic expression of negation. She has also investigated the notion of clause type at the syntax/semantics interface, focusing in particular on exclamatives and imperative clauses. Her interest in comparing minimally different languages has led her to found the Yale Grammatical Diversity Project <http://ygdp.yale.edu>, a research group whose goal is to document and analyse syntactic variation in North American English. Her publications include numerous articles and books, including *Negation and Clausal Structure: A Comparative Study of Romance Languages* (Oxford University Press, 1997), *An Annotated Syntax Reader: Lasting Insights and Questions* (with Richard Kay and Tom Leu; Wiley Blackwell, 2013), and *Micro-Syntactic Variation in North American English* (with Larry Horn; Oxford University Press, 2014). 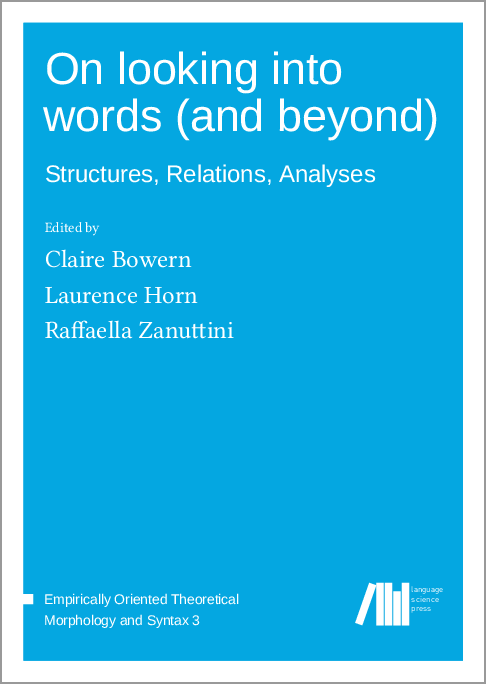