A new edition of this book is available at  http://langsci-press.org/catalog/book/234.

This volume contains the complete collection of published and unpublished work on German grammar by Tilman N. Höhle. It consists of two parts. The first part is Topologische Felder, a book-length manuscript that was written in 1983 but was never finished nor published. It is a careful examination of the topological properties of German sentences, including a discussion of typological assumptions. The second part assembles all other published and unpublished papers by Höhle on German grammar.

All of these papers were highly influential in German linguistics, in theoretical linguistics in general, and in a specific variant of theoretical linguistics, Head-Driven Phrase Structure Grammar. Topics covered are clause structure, constituent order, coordination, (verum) focus, word structure, the relationship between relative pronouns and verbs in V2, extraction, and the foundations of a theory of phonology in constraint-based grammar.

As per legal requirement, we state that this book is available in Germany for 70 EUR.

His research within grammatical theory and German grammar covers (i) a range of syntactic topics, in particular topological and other aspects of clause structure (such as extraction, non-finite constructions, constituent order, coordination, (verum) focus), (ii) aspects of ‘word syntax’, and (iii) theoretical aspects of phonology, in particular in model-theoretic grammar (HPSG).

Frank Richter studied linguistics, computer science and psychology at Universität Tübingen (Promotion 2000, Habilitation 2004), and linguistics at the University of Massachusetts at Amherst. After many years of research and teaching in Tübingen, various Vertretungsprofessuren in linguistics and computational linguistics in Tübingen, Stuttgart, and Düsseldof, he became Hochschuldozent at the Institut für England- und Amerikastudien of Goethe Universität Frankfurt in 2014.

His main areas of research are in formal semantics, computational semantics, grammar implementation, and the formal foundations of linguistic theory; he is very interested in phraseological constructions with a particular focus on (negative) polarity items, their distribution and their role in grammar. Most of his training in syntax he received in classes taught by Tilman Höhle in the 1990s.

Her main research field is the grammar of Modern German, in particular clausal syntax, extraction, and the relation between grammar and pragmatics, but her published work also includes studies in historical phonology, semantics, word formation, linguistic methodology, and history of linguistics. 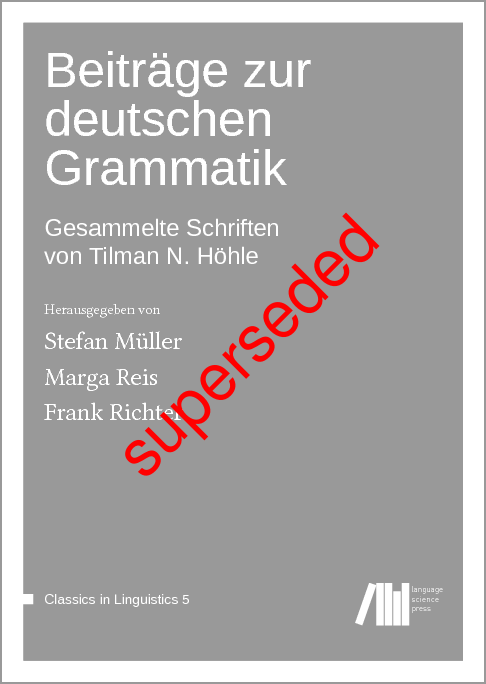