African linguistics on the prairie: Selected papers from the 45th Annual Conference on African Linguistics

African Linguistics on the Prairie features select revised peer-reviewed papers from the 45th Annual Conference on African Linguistics, held at the University of Kansas. The articles in this volume reflect the enormous diversity of African languages, as they focus on languages from all of the major African language phyla.  The articles here also reflect the many different research perspectives that frame the work of linguists in the Association for Contemporary African Linguistics. The diversity of views presented in this volume are thus indicative of the vitality of current African linguistics research. The work presented in this volume represents both descriptive and theoretical methodologies and covers fields ranging from phonetics, phonology, morphology, typology, syntax, and semantics to sociolinguistics, discourse analysis, language acquisition, computational linguistics and beyond.  This broad scope and the quality of the articles contained within holds out the promise of continued advancement in linguistic research on African languages.

Jason Kandybowicz is Associate Professor of Linguistics at The Graduate Center, City University of New York.  He is the author of The Grammar of Repetition: Nupe Grammar at the Syntax–Phonology Interface (John Benjamins), co-editor of Africa’s Endangered Languages: Documentary and Theoretical Approaches (Oxford University Press), as well as the author of a number of articles in various linguistics journals.  His research interests include syntactic theory, the syntax–phonology interface, field linguistics and language documentation, and African linguistics (particularly, the languages of West Africa).

Travis Major is a Ph.D. candidate in Linguistics at the University of California, Los Angeles. He is interested in syntax, semantics, field linguistics, and language documentation. He conducts research on Lower-Cross languages in Nigeria, as well as Turkic languages.

Harold Torrence is Associate Professor of Linguistics at the University of California, Los Angeles.  He is the author of The Clause Structure of Wolof: Insights into the Left Periphery (John Benjamins), co-editor of Africa’s Endangered Languages: Documentary and Theoretical Approaches (Oxford University Press), and the author of several descriptive and theoretical articles in various linguistics journals.  His areas of research include syntactic theory, morphology, field linguistics, language documentation, African linguistics (the languages of West Africa, in particular), and Meso-American linguistics.

Phil Duncan is a Lecturer at the University of Kansas, where he teaches courses on syntax, typology, linguistic anthropology, language revitalization, and general linguistics. His research focuses on syntax and its interfaces with semantics and morphology. His most recent work is on Meꞌphaa, an Otomanguean language from Guerrero, Mexico, and Ibibio, a Niger-Congo language from southeastern Nigeria. 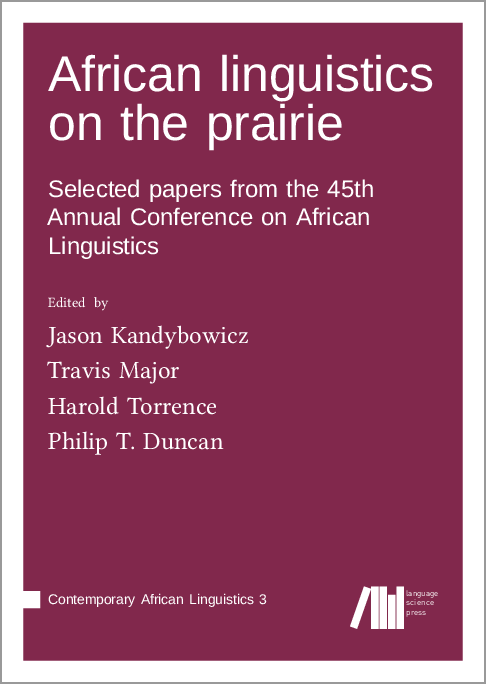