Multiword expressions (MWEs) are a challenge for both the natural language applications and the linguistic theory because they often defy the application of the machinery developed for free combinations where the default is that the meaning of an utterance can be predicted from its structure. There is a rich body of primarily descriptive work on MWEs for many European languages but comparative work is little. The volume brings together MWE experts to explore the benefits of a multilingual perspective on MWEs. The ten contributions in this volume look at MWEs in Bulgarian, English, French, German, Maori, Modern Greek, Romanian, Serbian, and Spanish. They discuss prominent issues in MWE research such as classification of MWEs, their formal grammatical modeling, and the description of individual MWE types from the point of view of different theoretical frameworks, such as Dependency Grammar, Generative Grammar, Head-driven Phrase Structure Grammar, Lexical Functional Grammar, Lexicon Grammar.

Manfred Sailer (1969) is professor of English Linguistics at Goethe-Universität Frankfurt a.M. He studied general linguistics, computer science and psychology at Universität Tübingen (Master 1995, Promotion 2003) and received his postdoctoral degree (Habilitation) in English and General Linguistics at Göttingen University (2010). His main areas of research are the syntax-semantics interface, formal phraseology, negation, and the interaction of regularity and irregularity in language.

Stella Markantonatou (1958) has studied Chemical Engineering (National Technical University of Athens) and Linguistics (Nationaland Kapodistrian University of Athens) and holds a PhD in Linguistics (University of Essex). She is a Research Director with the Institute for Language and Speech Processing/Athena RIC, Athens, Greece. She has published on the formal study of the syntax-semantics interface, on phrase-based Machine Translation, and on the development of lexical resources. 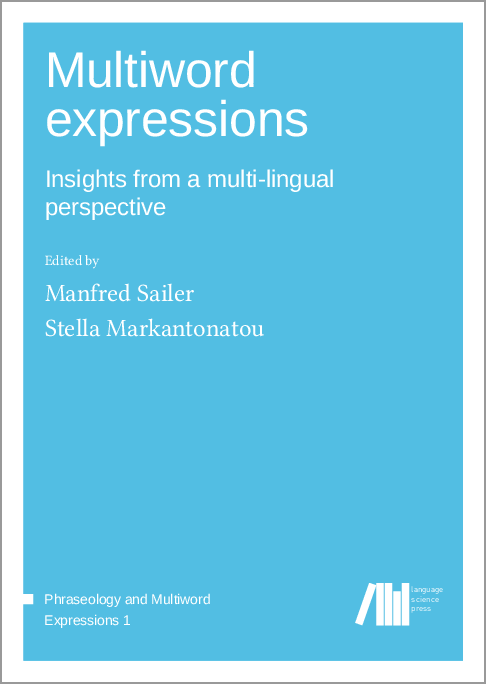